Generation to generation, digital video consumption through the ages

It’s no surprise that younger generations are leading the charge on digital video consumption in the U.S. In eMarketer’s recent digital video reporting series, Millennials make up the largest portion of digital video viewers with over 64.8 million consuming digital video at least once a month.

Millennials that stream over three hours of digital video daily tend to use computers, connected TVs or gaming consoles to get their video content fix. Increasingly, social platforms are becoming a streaming method for this age group. This is no surprise as this digital-centric generation is full of heavy social media users who are exposed to video content on popular social channels such as Snapchat and Instagram.

Gen Xers follow close behind the Millennials with 51.8 monthly viewers. Similar to their younger counterparts, Gen Xers are straying away from traditional TV viewing and flocking to digital video as many are quitting cable in favor of OTT. Sited in the eMarketer Gen X report, the top three favorite video content providers for this generation are Netflix, YouTube and Hulu. 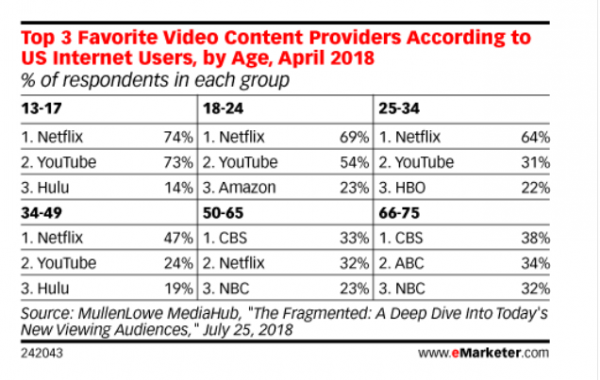 While typically not as tech savvy as their younger cohorts, Baby Boomers are 37.7 million strong when it comes to monthly digital video viewing. This group is more likely to use computers and streaming services than smartphones to watch video. The Boomers are the only group to spend more of their time watching traditional TV than digital video.

Similar to other social platforms, YouTube has launched its own stories feature. However, there’s a catch! To access this feature, YouTubers must have more than 10K subscribers.

YouTube’s story feature will allow big brands and influencers the ability to have prolonged exposure as stories can be as long as seven days. The feature is designed for YouTube’s influencer community but also applies to brands and agencies managing accounts with a larger following.

Look for this new feature in the subscriptions tab, the home page and the “Up Next” list below videos. Viewers will be able to comment on the stories the same way they do videos.

Gen Z is up and coming! According to Ad Week, the 13 to 24 age group is estimated to have greater spending power than their Millennial counterparts. As they begin to enter their working years, here are some key notes on this technology connected audience.

Account-based marketing: a strategic approach to business marketing based on account awareness in which a business or agency considers and communicates with individual prospects and customer accounts.