On average, U.S. adults spend 12 hours and 8 minutes per day with media, according to eMarketer. This isn’t a huge shift from 2017. However, this year, digital media consumption will beat out traditional media for the top spot on the list of most consumed channels.

This year, U.S. adults will spend approximately 52.1 percent (6 hours and 19 minutes) of their time with digital media. This increase is mostly due to the rise in adoption and consumption of long-form digital video content. eMarketer has forecasted that by the end of 2018, over half of the U.S. population will have access to an over-the-top (OTT) video subscription such as Netflix, Hulu and Amazon.

As for time spent with social media, adults spend the most time with Facebook at 24 minutes per day. Instagram and Snapchat respectively make up 9 and 7 minutes of daily consumption. Digital audio will contribute more time to the overall media consumption numbers than social networking. It is estimated that adults will spend 69 minutes listening to digital audio in 2018. 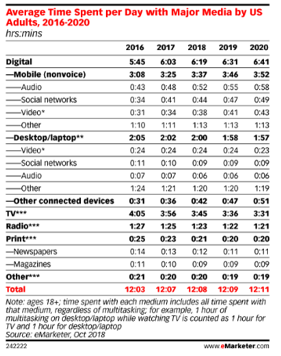 Apple taking a bite out of digital search advertising

Apple has released an updated anti-tracking feature for Safari in the latest Apple update, according to Ad Age. This new update is making it difficult for advertisers to calculate the ROI for their digital ads ran on the Safari browser.

The feature is called “Intelligent Tracking Prevention” and it prevents Safari users from being targeted across the web. For example, if someone visits a website, they won’t be targeted for that site elsewhere on the internet such as through Google search targeting.

This is a major problem for marketers because as a prominent Internet browser, Safari captures 50 percent of the mobile market. With Safari’s stronghold in the market and the Intelligent Tracking Prevention feature, advertisers will have to modify their ROI tracking for digital advertising.

Snapchat by the numbers

By the end of 2018, Snapchat will have 84.8 million monthly users in the United States. According to eMarketer, the U.S. audience numbers are expected to increase 7.1 percent over 2017 numbers. Globally, Snapchat has roughly 100 million monthly active users.

This year, the social platform will have gained 1.8 million users under the age of 25 in the U.S., which is on par with that of Instagram. The platform is seeing the 25−44 demographic driving growth. This is noteworthy because this age group is slightly older than the typical Snapchat audience which is made up of those under 25.

Snapchat is expected to see $662 million in U.S. ad revenue in 2018. The platform has been increasingly adding new ad units, with a focus on augmented reality features. 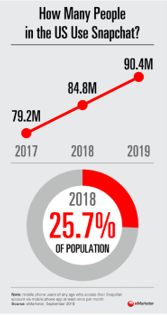 Retailpocalypse: With the rise of digital marketplaces such as Amazon, many retailers with physical store fronts are figuring out how to adapt and survive in the digital world. Many have fallen victim to the retailpocalypse in the past year, such as Sears and Claire’s. However, some have managed to overcome.