Google’s attempt to enter the world of social networking, Google+, is getting the axe after Google leaked private user information. The incident allowed for hundreds of thousands of Google+ users to have their personal data exposed. The exposure of data was caused by a glitch in the Google+ app that caused the leak.

Google didn’t report the security issue when it happened for fear of reputation damage and possible regulatory repercussions. Rather, the company fixed the incident “quietly” without going public. Which didn’t work out very well. In a world where internet privacy is of the upmost importance, Google could face consequences perhaps in the form of hefty fines.

Digital Video Is on the Rise

See how other platforms square up when it comes to video ad revenues. 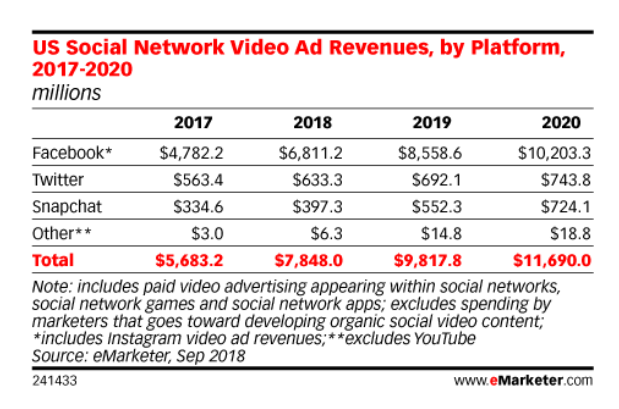 On average, brands see a 72 percent completion rate on their Instagram Stories.

RTB: Often facilitated by supply-side platforms or ad exchanges, real-time bidding is the buying and selling of online ad impressions through a real-time auction.

CCPA: The California Consumer Privacy Act was passed by the state of California in response to consumer data privacy concerns. CCPA will focus exclusively on data collection and privacy. Learn more about how it will impact advertisers here.